If We Do Not Stop Them, the Jews Will Kill Us All and I Quote: 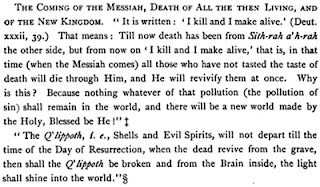 Over the years, I have documented several passages in the Old Testament, Talmud and Cabalah, which the jews interpret to mean that the jews' messiah will exterminate the human race. I have found yet another express statement of the jews' intent to genocide the human race in Isaac Myer's Qabbalah of 1888, on page 437, which states in the relevant passage,

"The Coming of the Messiah, Death of All the then Living, and of the New Kingdom. "It is written: 'I kill and I make alive.' (Deut. xxxii, 39.) That means: Till now death has been from Sith-rah a'h-rak the other side, but from now on 'I kill and I make alive,' that is, in that time (when the Messiah comes) all those who have not tasted the taste of death will die through Him, and He will revivify them at once. Why is this? Because nothing whatever of that pollution (the pollution of sin) shall remain in the world, and there will be a new world made by the Holy, Blessed be He!""

The jews used to always pray to the East. The jews believe that the left half of man is female and evil. The left half of a man faces North when the man faces East. The jews associate the North, as in Europe, with evil. This is yet another reason why the jews seek to first genocide Europeans in their quest to kill off the human race.

Add to that the destruction of the temple by the Romans, the desecration of the temple by the Greeks and Romans, etc. The jews also associate the European man with Christianity and they loathe Christianity because it pretends to their throne as the tree of life and image of Adam. At the same time, the jews created and sponsor Christianity as the Esau to soldier and slave for the jews, and as a means to kill off the 70/71 gods of the nations, the Goyim, so as to leave the pagans with no supernatural protection and as a means to kill off the Elohim which compete with the jews' gods. The jews believe that by tricking the Goyim into abandoning their native gods, the jews kill off those gods in the heavens, as below, so above.

Genocide is the core goal and belief of judaism. The jews desire to kill everything that lives, man, animals, goy gods and the guardian angels whom the jews believe attend every created being. The jews promote genetically modified organisms because they believe this separates living beings from their guardian angels leaving life ripe for the jews' harvest of genocidal death.

The jews are a deadly poison to all that lives. Call the Congress. Write the Congress. Speak directly to the Congress. Do it now, before we all die. Do it today and tomorrow and the day after, until we stop the jews.