The Jewish Genocide of Europe: Kaganovich, Yagoda, Ehrenburg and Coudenhove-Kalergi 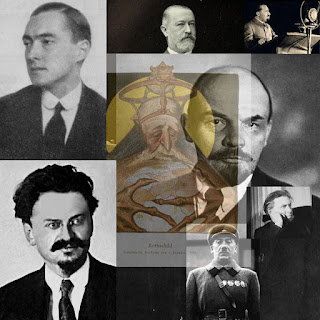 The jewish bankers Rothschild and Warburg financed Freemason Richard Coudenhove-Kalergi's campaign to breed out White Europeans with Africans, Middle Easterners and Asians. Coudenhove-Kalergi explicitly stated that it was imperative that jews become the master race. According to him, the only way for this to happen is to destroy the White race through the deliberate degeneration of miscegenation with inferior races.

In order to sponsor this miscegenation, Coudenhove-Kalergi proposed a Pan-Europa Union which became the European Union. He argued that the loss of sovereignty this union imposed on Europeans could then be exploited to breed them into non-existence through the mongrelization of the White race which would follow an invasion of immigration into Europe.

Crypto-Jewish Freemasons Leon Trotsky and Vladimir Lenin exterminated millions of the best Russians during and shortly after the Bolshevik Revolution. The jewish bankers Rothschild and Schiff funded the destruction of Russia and the Bolshevik Revolution by cutting off Russia from the money markets, financing Japan against Russia and brainwashing Russian prisoners of war with revolutionary propaganda, and funding the invasion of revolutionary jews from New York into Russia.

The jewish bolshevik Ilya Ehrenburg called for Soviet troops to commit mass rapes of all German females from small children to old women, and they did raping every female they could lay hands on in the territory they conquered. Ehrenburg also instructed the Soviet troops to mass murder German men and they did. Ehrenburg stated that his aim was to eliminate the German race by attacking its racial and national spirit.

Today, the bolshevik Angela Merkel is genociding the German race by importing millions of Africans, Middle Easterners and Asians into Germany, and encouraging them to rape German woman and replace German men, pursuant to Ilya Ehrenburg's directives and Richard Coudenhove-Kalergi's plan to genocide the White race in favor of jewish world rule:

Posted by Christopher Jon Bjerknes at 10:27 AM