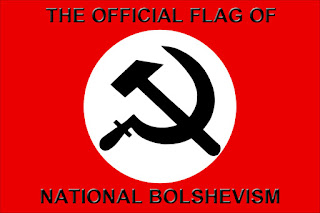 In the early 1990's, I spent a good deal of time in Germany. On an ancient farm on the outskirts of Wuerzburg, I stayed overnight with a group of students from Dresden. Bear in mind that this was shortly after the feigned break up of the Soviet Empire and the reunification of Germany.

In general, I found the East Germans to be clannish, childish and an entirely different and lesser personality type than their West German counterparts. Those students from Dresden were virulently anti-American communists. They told me that the communists would come back stronger than ever, and that America would lose the war to the communists. They also told me that when the East German government supposedly fell, their teachers announced suddenly that they would become western, but that they all knew that this was only temporary to provide them cover for infiltrating and destroying the West in favor of the rebirth of an even greater and more powerful Soviet Empire that would consume Western Europe and take over America at some point in the not too distant future.

I laughed off their rants, then, but I am no longer laughing. I now see and understand exactly what they were talking about. I now suspect that the KGB and Stasi were and are immensely strong in Dresden and had brainwashed the population to serve as their anti-Western fifth column.

PEGIDA formed in Dresden. Its incipient form first emerged from the wreckage Putin's Chechen Shock Troops had left behind in Celle. Soeren Kern writes in his article Germany: Holy War Erupts in Hamburg:

"On the same day of the unrest in Hamburg, dozens of mostly Chechen Muslim immigrants clashed with Kurdish Yazidis—a non-Arab and non-Muslim minority that has been persecuted by IS—in Celle, a town in Lower Saxony that is home to more than 7,000 Yazidis. Police said the violence, in which nine people were injured, was fuelled via social media after radical Muslim preachers sent out a call to Islamists to confront the Yazidis."

This KGB staged clash and others like it, served as the pretext for the formation of a supposedly right wing anti-Islamification movement. But the real, thinly vieled purpose of the organization is to promote the dialectic of a clash between fascists and antifascists, with both sides of this contrived struggle working to overthrow NATO and invite in Russian bolshevism to Europe, ultimately converting all of Europe into vassal states in the new Soviet Union.

We see this manifest in the latest PEGIDA event, which the Associated Press reports was more concerned with supporting Putin's subversion of Europe and Syria, than it was forwarding a German nationalist agenda,

"Aside from its nationalist and anti-Islam stance, the group has also sided strongly with Russia. Several Russian flags were flown at Saturday's rally in Dresden, along with banners including "Peace with Russia" and "Stop war against Syria."

PEGIDA is hardly the only KGB front organization seeking to undermine NATO and create civil unrest in staged clashes with antifascists, leading to a communist revolution and the intervention of Russian forces within NATO borders. The Golden Dawn and SYRIZA are playing the same game. In Turkey, the Ergenekon are promoting Putin and communism and clashing with the AKP and Erdogan, all to lead Turkey into the communist revolutionary trap and drag it out of NATO.

In America, the total fascists are mouthpieces for Putin's anti-American and pro-bolshevik propaganda. On the same websites which featured Nazi aircraft and icons, they promoted bolshevik women in full communist regalia, and wrote of Putin as if he were the second coming of Christ.

The neofascists are clearly communist front organizations. The communists first undermined White nations with a massive invasion of hostile elements. Now the communists foment discord, the destruction of NATO and philobolshevism and Putinism in the very same places the very same communists are ruining with the invasion of hostile elements. The communists created the problem and propose the solution, the dissolution of the military alliance created to protect Whites from communism and the welcoming in of bolshevism as a replacement social system for Whites headed by emperor Putin.

Putin is spreading terrorism all throughout the Middle East, Europe and America and at the same time promoting antiwestern subversives who promote him and Putin's bolshevism, as if the solution to the terrorism the same communists have created. ISIS is Putin's tool to create the pretexts he seeks for bolshevizing the World, and for invading other nations and encircling NATO.

Angela Merkel, Putin's old friend, is Stasi and is working for the KGB to create unrest in Germany. Putin is creating front organizations to serve as the controlled opposition to KGB Merkel and his ISIS terrorists, and call for the destruction of NATO and invite in Russian bolshevism.

Putin is already surrounding Turkey with bases in the Crimea and Syria, as well as the nations of the European Economic Union. Putin is fomenting anti-Turkish and anti-NATO, as well as pro-Russian and pro-bolshevik sentiment in Greece. Instead of defending Turkey and NATO with it, the communist controlled press of Europe, America and Israel are slamming Turkey for defending its borders, and praising Putin for attacking Turkey, and with it NATO. This same jewish controlled press covered up for Stalin and hid the Holodomor from Western eyes.

Putin created ISIS to provide a pretext for his invasion of Syria and encirclement of NATO nation Turkey. This will serve him to cut off Europe from Middle Eastern energy. Putin had the German traitor Gerhard Schroeder subvert German interests and make Germany dependent on Russian energy. Schroeder and Merkel have served the KGB well.

The communists weakened Europe with the EU and are now ready to enslave it with a grossly expanded USSR. First they must destroy NATO, and Putin's quasifascist crypto bolsheviks are the hammer the sickle is using to slay us.

There is a way out. If Russia and NATO joined forces to ruin jewish communism, we together would control almost all of the nuclear weapons in the World, and would have the military leverage to insist that all other nations possessing nuclear weapons surrender them to us. In this way we could form a pact to preserve the White Race, rather than destroy it, which is Putin's jewish mission.

If Putin succeeds in bolshevizing Europe and creating civil war, the war will never end until all Whites with an IQ over 70 have been murdered or bred out. The rest will be sex slaves for jews and Muslims, and or slaves performing menial tasks for life. The jews have been doing it to Eastern Europeans for centuries, and are now turning their attention to the West.