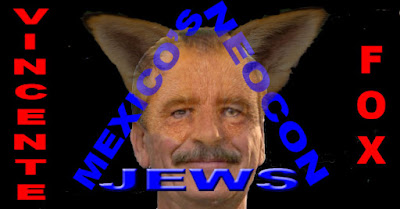 Like Barack Obama, Vincente Fox headed a very kosher "Mexican" government. Fox's neoconservative policies crossed the line over to treason, so it is no wonder that he is opposed to borders. The many jews in Fox's government sparked outrage and controversy, and they were openly accused of disloyalty to Mexico in favor of jews and zionism. See:

A brief history of the Jews in Mexico BY Mel Goldberg

Like Stalin and Lenin before him, neoconservative trotskyite Vincente Fox made "antisemitism" a crime in Mexico in 2003. Some suspect that Vincente Fox is a crypto-jew. Fidel Castro certainly is.

Fox is now sticking his nose over the border into American politics and is chiding Donald Trump, much like drug runner El Chapo Guzman. Fox wanted America to protect Israel and is all for Israel being a "Jewish State", but America has no right to its national sovereignty, for the whole world is international jewish territory, as proven by Vincente Fox's treasonous government.

Mexico is even dominated by jews in American public life. For example, jewess Patricia Jinich, married to investor Daniel Jinich, hosts a "Mexican" cooking show on American Public Television, and has appeared on Fox News--no relation to old Vincente. See:

That jewish privilege appears everywhere, does it not?