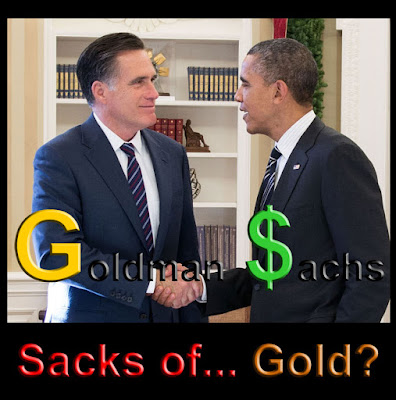 On the heels of Super Tuesday, Mitt Romney is attempting to derail Donald Trump's campaign, and to draw him away from Ted Cruz. Romney is claiming that there might be a "bombshell" in Trump's tax returns.

It is doubtful any such bombshell exists beyond Romney's imagination. Trump is running for President. He is not a stupid or naive man. Rather, Trump is being audited, again, and must wait for the process to close before his attorneys will allow him to make his returns public.

So why is Romney attacking Trump at this key juncture in the race? What could motivate him to try to ruin Trump, a fellow Republican and the clear front runner in a race in which Romney is not running?

Romney is another man with close ties to Goldman Sachs, whose (deliberate?) failure in the 2012 Presidential race led to Barack Obama's unlikely victory. See:

Romney's running mate in 2012 against Obama was banker bailout queen Paul Ryan, a libertarian crypto-communist who is now Speaker of the House of Representatives, and who also was big fan of Goldman Sachs. See:

Is it just a coincidence that Ted Cruz and his wife are also close to Goldman Sachs? See: