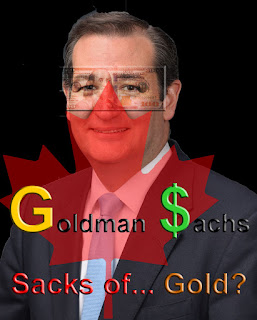 There seems to be a curse on political candidates that had some kind of business dealings with Goldman Sachs. Some scandal in their past kills their campaign, leaving an otherwise less viable candidate the last man standing in the race. I have in mind the unlikely win of Barack Obama to the US Senate from Illinois in 2004.

Blair Hull was a cinch to win the Democratic Party's nomination as candidate for the U.S. Senate in 2004. But then his campaign was rocked by scandal. Hull had sold Hull Trading Company to Goldman Sachs for $531,000,000.00USD. Hull's withdrawal from the race made way for Barack Obama's unlikely win in the Democratic Primary.

Then, amazingly, Republican Primary winner Jack Ryan, former partner at Goldman Sachs, dropped out of the race following a scandal. This made way for Barack Obama to win the general election, which paved his way to the Presidency as if on a golden carpet ride.

But will the last man standing be Donald Trump, or Bernie Sanders, if these scandalous sparks catch fire? The press and Ted Cruz's dirty tricks favor commie Bernie, not Trump.

Cruz, as Trump points out, will lose to Sanders or Clinton, because Cruz cannot be President. He is NOT a natural born citizen of the USA, and so the Supreme Court will sack him, Obama's Supreme Court. Clinton has already pledged to appoint Obama to said court and further stack it with communists who favor Obama style dictatorial rule, Obama so favored by fate and the fortunes of Goldman Sachs.

Edward Mandell House published a book more than a hundred years ago, which spelled out these methods for turning democracy into oligarchy and overtaking the Senate, Presidency and the US Supreme Court, titled Philip Dru: Administrator: A Story of Tomorrow, 1920-1935. Before that book appeared, the Protocols of the Learned Elders of Zion stated:

"To accomplish our plan, we will engineer the election of presidents whose past record contains some hidden scandal, some 'Panama'--then they will be faithful executors of our orders from fear of exposure, and from the natural desire of every man who has reached authority to retain the privileges, advantages, and dignity connected with the position of president. The Chamber of Deputies will elect, protect, and screen presidents, but we will deprive it of the right of initiating laws or of amending them, for this right will be granted by us to the responsible president, a puppet in our hands. Of course then the power of the president will become the target of numerous attacks, but we will give him the means of self-protection by giving him the right of directly applying to the people, for their decision, over the heads of their representatives. In other words, he will turn to the same blind slave—to the majority of the mob. Moreover, we will empower the president to proclaim martial law. We will justify this prerogative under the pretext that the president, as chief of the national army, must control it in order to protect the new republican constitution, which he, as a responsible representative of this constitution, is bound to defend. [***] By means of orders issued by the president as general statutes[.]"

It appears that the curse of Goldman Sachs will live on to doom the candidacy of Ted Cruz and Hillary Clinton. That would leave a Jew communist and a billionaire standing. House and the Protocols laid tremendous emphasis on the power of the press to control public opinion and political elections. The press is the tell, and presently they are pressing for the communist Jew.

David Duke has put out the following video: