Are Donald Trump and Newt Gingrich Cowards, Communists, or Both? 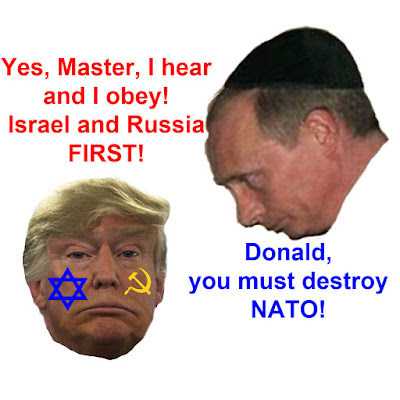 Pathetic low life Newt Gingrich is sabotaging our national security and bolstering communist Russia by deliberately weakening the NATO alliance. Gingrich, who divorced his wife when she came down with cancer, said of America's commitment to NATO ally Estonia,

Evidently, Newt and Donald view America's military alliances the same way they view their marriages. It does not occur to the communist traitors, that it is Estonia which is facing the greater risk in defending us, the USA, than we are in defending it. As Gingrich freely acknowledged, it is Estonia which is under immediate threat, and which is next door to aggressive Soviet Russia, which has already recently invaded the Ukraine. Estonia is providing our first line of defense.

Trump is so stupid, or so deceitful, as to suggest that it is logistically equivalent to have our troops at home and deploy them from here, as it is to base some of them overseas in the immediate vicinity of threats. Trump and Gingrich, who speak of making America stronger, have already made us infinitely weaker with their big babbling mouths! No longer can our allies trust our treaties!

Trump is already destroying us and has not yet set foot in the White House. Trump has already increased our risk of nuclear attack and the likelihood that Russia will invade the Baltics. Is this his genius for defending us? No thanks, Donald!

From now on, our military allies must view our treaties as if prenuptial agreements meaning nothing, except the fact that America only cares about its money.

Is this the kind of scum that will lead us in this dangerous period of our history?

Trump is not fit to lead us, nor is Clinton. Both are worse! Trump has hurt us very badly with this, very badly, the bastard!