The Anti-White Wives of Democrat Presidents 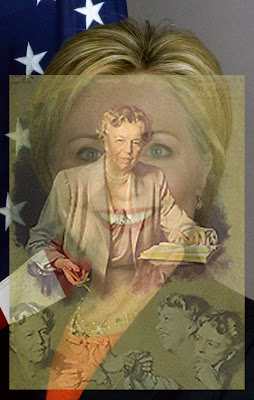 FDR's wife Eleanor Roosevelt was converted to lesbianism and feminism at an early age by Marie Souvestre. Souvestre's father warned of a dystopic world government to come, and Eleanor Roosevelt did her best to bring it about, serving as delegate to the UN. Harry Truman dubbed Eleanor "First Lady of the World". She was a world government communist working for world jewry to subvert America and the White Race. She incited blacks against Whites and subverted White interests.

Hillary Clinton is another lesbian communist "First Lady of the World". She sought to install a communist health care system in America and is constantly working toward world government and undermining the White Race. She has made it her mission to incite blacks to rebel against America and slaughter American police officers. She desires to be the emblem of feminism to discourage Whites from breeding and living in normal nuclear families. She seeks trade deals which undermine the American middle class, forcing families to hand over their children to the State, another nightmare forecast by Émile Souvestre in his novel Le monde tel qu'il sera.

Clinton is worse even than Roosevelt was, and that is saying alot. Both were groomed to subvert and destroy us, and they have both been very successful in their mission.

Posted by Christopher Jon Bjerknes at 11:50 AM