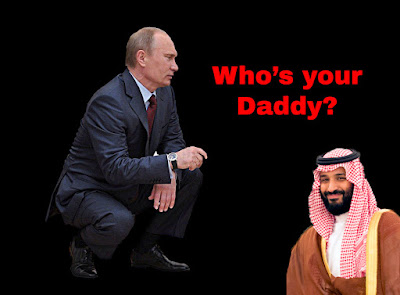 Jamal Khashoggi was a Mossad agent and was working with the Russians. Russia has been subverting Turkey and Khashoggi was helping the Russians in this, and assisting the Mossad, Russia and the CIA to bring the Arab Spring to Saudi Arabia.

Saudi Arabia has long assisted the USA to bring Russia to its knees. That being the case, you can be certain that the Russians have long sought compromising material on Saudi royalty. The Russians are intensively surveilling the Saudis, as are the Mossad. Both knew the execution of Khashoggi was planned before it happened, and how and when it would happen. Both have the support of Turkish authorities.

I suspect the reason why Mohammad Bin Salman has so quickly and eagerly jumped into bed with KGB Putin is that the Russians or Mossad sent Khashoggi into the embassy with a wire, or what acted as one, and made recordings of what took place knowing it was about to happen from their snooping on Saudi conversations. I strongly suspect the Russians have Kompromat on Mohammad Bin Salman probably in the form of direct orders from him for the murder.

I can think of no other reason for the Saudis to sacrifice relations with the USA, which has infinitely more to offer Saudi Arabia than Russia ever could, to become an asset of Russia against America and Europe. Add to this the fact that the communist media are squeezing Mohammad Bin Salman and driving him into the arms of Putin, who has this Kompromat which would be used by the media to call for international crimes charges against Mohammad Bin Salman and the seizure of his accounts. There is no other explanation for the ability of the Russians to turn him against us, which is clearly not in his or Saudi Arabia’s best interests.

On top of all that, Trump was about to meet Putin face to face, I suspect to discuss this matter and how to play it. Trump is gently asking the Saudis to keep oil prices down, but does nothing to threaten Mohammad Bin Salman, who is being blackmailed by the Russians. This helps the Russians by making it appear there is a wedge between the USA and Saudi Arabia, without imposing any punishment on the Saudis for climbing into bed with Putin. All the Jewish forces are driving Saudi Arabia to Moscow and Trump does nothing to stop it. Putin almost certainly has this Kompromat on Mohammad Bin Salman.