The Dehumanization of Christopher Jon Bjerknes 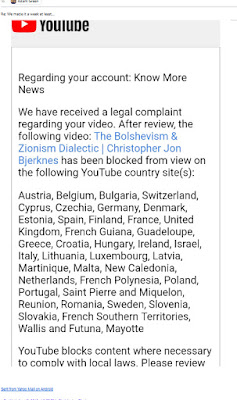 I have always found it a bit pretentious when others refer to themselves in the third person. But now that I have not only been censored, but rendered illegal, I feel I have earned the right to talk about the much maligned Christopher Jon Bjerknes, persona non grata, as if someone other than myself, someone under a spotlight, a searchlight and a microscope.

Caught in the crosshairs of Jewish power, my work is so effective, that legal action was taken against it within 5 days to shut it down. It is so offensive to liars because it is so demonstrably true to neutral observers. If the powers that be were able to refute what I have said, they would try. They cannot, but instead of conceding that I have spoken the uncomfortable and needed truth, which could potentially help save billions of lives from the coming catastrophe, they nevertheless feel justified and compelled to impose their criminal tyranny over me with their Bolshevik oppression, and formally censor my words. I have not only failed to win the Nihil Obstat of the Church of Jewish privilege, I am officially banned from the public forums of humanity.

This follows decades of uncivilized censorship. Though my critics are afforded page after page in the mainstream press to spread their lies about me and my work, my responses in defense of the truth have always been suppressed, utterly unwelcome in the Jewish controlled press. This flies in the face of the best traditions of Western Civilization, but is in perfect conformity with Jewish law, which forbids Gentiles to examine the facts of things Jewish, let alone render judgement upon them.

Learn from me, friend and foe alike, that America is a beautiful and glorious place, a bastion of human dignity where freedom is enshrined in the Bill of Rights of the Constitution of the United States of America. Do not listen to any KGB shill calling itself a White Nationalist or Alt-Rightist, who urinates on the bill of rights, while lauding Bolshevik Vladimir Putin who likewise censors all truths uncomfortable to Jewish power. They seek only to wet the fire of freedom with the rains of disingenuous Jewish tears and extinguish its revealing light.

Learn from me, friend and foe alike, that we must fight without ceasing until our freedoms are universal and secure. The dark obfuscations of Bolshevism and Zionism are snaking their way around the globe and your saviors are demons sinking their fangs into the neck of your freedom to draw the blood of liberty out of your lives and leave you a dry corpse preserved in an enshrined cocoon of carefully spun lies.