I Warned You that Trump Is a Bolshevik 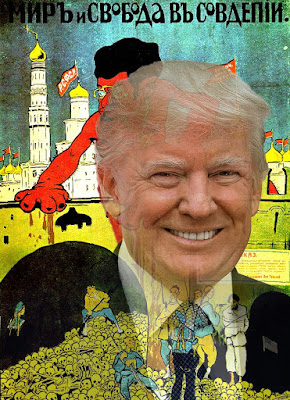 Donald Trump is vividly displaying his commie red colors. He sides with the Chinese communists against the Hong Kongese, Americans and our allies. The "Don", who is a puppet working for the Jewish mafia, sides with the North Koreans against Americans, the South Koreans and our allies. He takes KGB Putin's side against America, NATO and our other allies.

Now, Bolshevik Trump is threatening to commit Red Terror against American citizens. Trump is attacking the First Amendment with his support for capital "Hate Crimes" laws which proscribe criticism of the Jews on pain of death, with his attacks on the free press, with his promotion of the genocidal Noahide laws, and with his use of State powers to discourage organized dissent to oppose his dangerous tyranny.

The First Amendment to the Constitution of the United States of America states:

"Congress shall make no law respecting an establishment of religion, or prohibiting the free exercise thereof; or abridging the freedom of speech, or of the press; or the right of the people peaceably to assemble, and to petition the government for a redress of grievances."

Just as the rules employed by social media oligarchs to silence us on the internet are vague, arbitrary and draconian, so too is Trump's campaign to silence us. These forces which pretend to oppose one another are a saw blade suspended as a pendulum which swings back and forth cutting away at our rights, our human dignity, and soon our necks. This ever increasing set of anti-American regulations are intended to cause us to self censor out of fear of retaliation for speaking the truth and defending our selves, our neighbors and our nation.

Just as social media is prompting us to self censor for fear of being removed from the public arena and just as antifa and Jewish alphabet non-governmental and now governmental agencies attempt to intimidate us into silence for fear of losing our means to earn a living and enduring dishonest public shame; Donald Trump is now threatening our very lives with capital punishment for speaking the truth and defending our rights. He is now threatening to deny our fundamental constitutional rights to freedom of religion, freedom of speech, freedom of assembly, freedom of the press, and the right to keep and bear arms. He is also calling for the summary execution of the accused under his Bolshevik laws which proscribe free speech on pain of gun confiscation and death. And Trump not only desires to murder the free, but their families as well, a classic Bolshevik tactic to destroy the genetic material of freedom loving human beings.

Lenin, Trotsky and Stalin immediately proscribed free speech and "anti-Semitism" when they took over Russia and mass murdered 30 million people by 1923. Trump has done the same. He is just as much a Bolshevik as were they.

He has created a climate of fear and governmental intimidation, whereby citizens now have to weigh the consequences of speaking out against him and his Jewish agenda of murdering all those who speak the truth and defend their rights. Trump has now placed a breeding pressure on European civilization, whereby the cowards and stupid will thrive and the best, most courageous, honest and noble who are willing to defend their fellows are murdered by the State.

The State is now hobbling the citizenry, which it views as its slaves. And it is Trump, not the phantom "Deep State" who is doing it. Behind Donald Trump stands Chabad Lubavitch, Zionism, Israel and international communism, in other words World Jewry. The misdirection of a supposed "Deep State" is a delusion behind which Trump hides the fact that he is controlled by Jewish leaders and always has been. He is implementing their Jewish agenda to enslave and exterminate us. He is openly threatening our lives and we must organize to speak out against him in the public square.

Donald Trump has not only trampled on the First Amendment, he seeks to shred the Second, which secures our rights to keep and bear arms, and he does it in the name of silencing dissent against disproportionate and tyrannical Jewish power. Trump is another Trotsky and he is aiming the State at us with the open threat of our genocide.

Posted by Christopher Jon Bjerknes at 8:36 AM