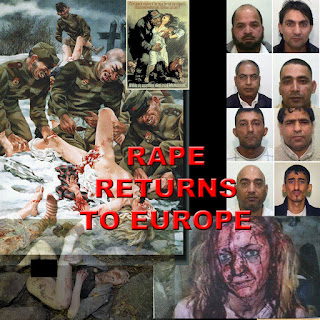 Kill, you brave Red-Army men, kill! There is nothing that the German is not guilty of. Comrade Stalin instructs us to put down this rabid animal. Break, with your force, the arrogant racial-pride of the Germanic Woman. Take her as your rightful prize of war. Kill, you brave Red Army men. Kill.

Kill! Kill! In the German race there is nothing but evil; not one among the living, not one among the yet unborn but is evil! Follow the precepts of Comrade Stalin. Stamp out the fascist beast once and for all in its lair! Use force and break the racial pride of these German women. Take them as your lawful booty. Kill! As you storm onward, kill, you gallant soldiers of the Red Army.

I have personally heard several accounts from Germans of the vicious rapes the Soviet Army perpetrated against all German females from small children to very old ladies. These mass rapes are well documented and few German females in the East escaped them.

Ilya Ehrenburg worked with the Jewish Anti-Fascist Committee, which produced anti-German propaganda in the Soviet Union. The German hating Zionist jew Albert Einstein chaired a reception committee that welcomed these jewish, Zionist, bolshevist propagandists into America, where they lied about the Germans and solicited contributions to the Zionist cause.

According to jewess Barbara Lerner, jews are leading the charge to make Europe multicultural and she fears they will be resented for it:

Will the Muslim rape gangs break the racial pride of European women, or will Europeans at some point take action to protect their women, and their nations? Who is it that has historically sent rapists into Europe? Who is it that was historically and is presently behind the White Slave Trade? Therein we find the subject for another article.