Taking Aim at the General Election, Trump Bombs the Bushes and Sprays the Stink Back at the Skunk Cruz 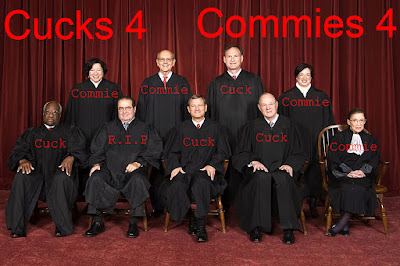 Tonight's debate was shockingly bizarre, but I suspect that Trump is up to something big. He unleashed on Cruz and may use Cruz' deceit as a pretext to sue him over his inability to serve as President due to the fact that Cruz is not a natural born citizen.

But by feigning indignation at Cruz' dirty tricks and lies, Trump will prevent the Republican Party establishment from legitimately criticizing such a law suit as benefiting the Democrats. The press is completely missing the big story behind the death of Justice Scalia.

If the Supreme Court now hears the case of the ineligibility of Ted Cruz to serve as President, it could produce a 4 to 4 split in the court with no majority ruling. Would the Senate, the full Congress or our current President then step in to render a ruling? How can we have a highest court in the land that stands to render a nonverdict by way of an inability to arrive at a majority on the issue of the legal status of a person to become President? How would the politics of the court manifest itself?

Would a liberal justice jump ship to favor Goldman Sachs and Ted Cruz, or simply recuse himself or herself for whatever reason is convenient to the cause? Would the court deliberately split itself in hopes Cruz would win the primary, then have Obama add another communist to the court, which will then hear the case again when Bernie or Hillary raise it in the general election should it come to that, to then rule against Cruz with a 5 to 4 majority? It is a very intriguing dynamic.

I believe that Trump is going after the Bush clan with a plan in mind. Trump dropped two nuclear bombs on the Bushes. He stated that they knew that Saddam Hussein had no weapons of mass destruction and lied about it, costing us American lives and trillions of dollars. And Trump quite correctly pointed out that the Bushes failed to prevent the 9/11 catastrophe and therefore failed to keep us safe. Trump is aiming his attack beyond the Bushes to the general election, where his attacks on the Bushes will play well with Democrats who hate Obama, the Clintons and the Bushes, and who will not vote for communist Bernie Sanders.

Trump is also handing Putin enough rope to hang himself with. Trump is hoping that Putin will spend himself poor in the Middle East, the way America has. Trump hopes Putin will do the heavy lifting with ISIS, and then we will face a weakened Russia and a weakened ISIS. He wants our enemies to consume each other, but evidently fails to understand that Putin is using ISIS as a pretext to expand his communist empire at the direction of Israel. But Trump is a smart man, and maybe he will find a way to handle that, if indeed Trump is for real.