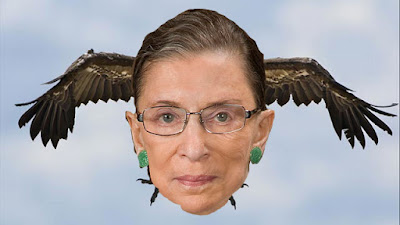 Communist Jew Ruth Bader Ginsburg has violated the constitutional separation of powers and is attempting to sway the presidential election to favor communist Hillary Clinton. While not as clannish as jews, communists are also quite tribal. They stick together and favor one another's interests.

Jewish tribalist Ginsburg is a Supreme Court Justice. She uses her position in government to favor the jewish, zionist and communist agendas. She is grossly biased, anti-Christian and sees it as her role to suppress the rights of the majority White population in order to destroy America. Abigail Pogrebin wrote, quoting Ginsburg,

So I ask the obvious question, "Does being Jewish affect the way you approach cases on the Court?"—expecting her to wave it off with some boilerplate version of Justices can't let personal experience color their judgment. Instead, her answer is more nuanced. "I don't think that I approach cases in a particular way because I am Jewish any more than I do because I'm a woman. I have certain sensitivities for both. You know the old expression, 'Is it good for the Jews?' For example, a lot of people want to have crosses in front of their town hall or whatever. They say, 'It doesn't hurt anybody.' We had one case where I was in dissent—it was about a cross in front of the Statehouse in Ohio. And to me, the photograph of that statehouse told the whole story of the case: Here is the Capitol in Columbus, and here is this giant cross. And what is the perception of a Jewish child who is passing by the Capitol? It's certainly that this is a Christian country. A person's reaction could be: 'There's something wrong with me.' It's not a symbol that includes you. [colored emphasis added]"

Communist jew Bernie Sanders has tagged Ginsburg's crooked claw and endorsed her smear campaign against Trump. Jews stick together, and so do communists, in this instance to promote communist Hillary Clinton.

Perhaps Trump will have the opportunity to replace communist jew Ginsburg with a new Justice who serves the interests of Americans, not jews and communists. The next president will appoint several Justices and this is one of the most important aspects of this election. It is why the traitorous jew Ginsburg is unconstitutionally intervening in the election to favor the jews and communism.

Trump should ask Ginsburg why she dislikes the cross, and if she is so inclined to resent the star of David. Judaism certainly curses the cross. Jews do not even like the Latin letter t, because their hatred of the cross so infuriates them that they cannot bear to see it or anything like it. It literally provokes them to spit and curse, by religious creed.

Trump should call upon Christians to elect him so that he can replace Ginsburg with an American. We do NOT want comrade Clinton to appoint the next wave of Supreme Court Justices.

Posted by Christopher Jon Bjerknes at 8:28 AM