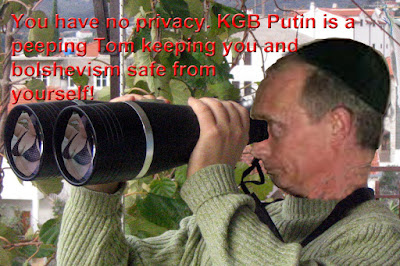 KGB Putin heads a global surveillance State which, together with the communist Chinese, spies on every aspect of our lives. They steal our industrial and military secrets. They infest our educational institutions. They listen in on our cellphones and watch us through our computers. They have a creepy communist army waging war on us relentlessly by watching and reporting on our every move.

Of course, the situation is even worse inside the borders of Bolshevik Russia, Communist China and now Marxist Turkey. Donald Trump wants to expand those bolshevik borders to include all of Europe and Islam and wall them in with an iron curtain for ultimate elimination following their absolute oppression. Donald Trump wants us to aid their surveillance of our people, our government and our military secrets. He wants us to open up American intelligence agencies to foreign enemies in the name of "America first!" and will have us reveal all of our secrets to them, to "keep us safe."

This is yet another example of Trump's Reaganlike treachery against America, with Trump putting Israel and Russia first against America's best interests. Seymore Hersh describes how the Carter administration put Israel first and gave them unprecedented access to our KH-11 military satellite information, and the Israeli treachery that followed.

Commie Ronny Reagan took it a step a further and essentially put the Israelis in charge of this, our most valuable intelligence system. Hersh wrote in his book The Samson Option,

"A former high-ranking NSA official recalled his anger upon subsequently learning early in the Reagan administration that Israeli military officers were permitted to attend Pentagon meetings at which future missions and orbital flight paths for the KH-11 were discussed. 'People who knew about it wanted to puke,' the former official said. 'With the care this [the KH-11] got everywhere else, this blew our minds.' [***] Ariel Sharon concluded after the cabinet room meeting that the United States was not a reliable strategic ally. He turned to a clandestine Israeli intelligence agency controlled by his defense ministry, whose operations at the time were not fully understood by Washington, and stood by as it intercepted intelligence on the Middle East and Soviet Union from the most sensitive agencies in America--the kind of intelligence that Israel had been told it would no longer be able to get. An American Jew working in the U.S. intelligence community had volunteered his services to the agency several years earlier; he would soon be put to work spying on his country for Israel."–S. Hersh, The Samson Option, Random House, New York, (1991), pp. 14, 16.

I have been warning for years, a decade now, that the alternative media is pushing a bolshevik agenda on us and wants us to welcome in bolshevik oppression in America. With disinformation and relentless anti-Americanism, they have brainwashed Americans to cheer Russia on as it attacks America. The KGB has thoroughly "demoralized" our dissident community to the point where their false and self destructive beliefs cannot be shaken by facts or logic. On the contrary, any confrontation with reality only serves to reinforce their devised delusions that their enemy is their salvation.

The very same people who decry the American surveillance State, cheer on the global surveillance State of KGB Putin and the communist Chinese. They do not care that Putin is peeping at them and violating the privacy of every American, American business and the American government. That, their enemy's spying on them is just great! They are so deluded as to believe that the communists spying on them keeps them safe!

How soon they have forgotten the 100 million the bolsheviks have mass murdered, the slavery they imposed on the White Race in Eastern Europe and the tens of millions of Germans the bolsheviks killed, enslaved and gang raped. Far from condemning the global bolshevik surveillance State, not merely gleefully submitting to it, these useful idiots want Putin to rule America through his puppet Donald Trump who is calling for Israel to take over our intelligence agencies, so that American intelligence is pooled with bolshevik surveillance to our detriment.

Look at how the people who put their faith in Putin have suffered in the Crimea, and that is where he has tried to make appear that he is doing good. The fate of America and Western Europe will be far worse when the jews take their vengeance on us with the full force of the bolshevik State behind them. Spying on us is only the first step. The next is into the grave they will have us dig for ourselves.

I wish someone would ask Trump what he thinks of Jonathan Pollard and whether or not Pollard put America first.

Posted by Christopher Jon Bjerknes at 8:23 AM