From Brandeis to Ginsburg, Jew Justices Have Been Bad for America and Good for the Jews 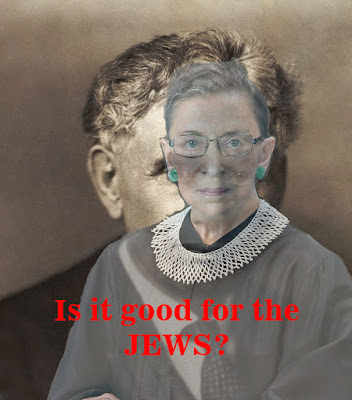 We really do need a constitutional amendment barring jews from public office. US Supreme Court Justices Louis Dembitz Brandeis and Ruth Bader Ginsburg are prime examples as to why.

Both of these biased, anti-American jews interfered heavily in American presidential politics in a very detrimental way. Frankist jew and vocal zionist Brandeis famously blackmailed President Wilson into nominating him for the Court, and blackmailed Wilson into attacking Germany in the First World War, so that the British would agree to sign the Balfour Declaration, and Palestine, over to Rothschild. Brandeis had love letters Wilson had sent to Mrs. Peck and used these to blackmail the President of the United States. The nomination of Brandeis was scandalous, because the entire legal profession knew he was a shyster and tool of the jewish bankers.

Brandeis cost America dearly and paved the way for the Second World War. Brandeis clearly placed jewish interests above American interests, and to the detriment of the American People and the world. On that basis alone, we ought to exclude jews from public office.

Ginsburg is another disloyal jew who serves the tribe, not the American People. Ginsburg openly stated,

"I would not look to the U.S. Constitution, if I were drafting a constitution in the year 2012. I might look at the constitution of South Africa. That was a deliberate attempt to have a fundamental instrument of government that embraced basic human rights, have an independent judiciary. It really is, I think, a great piece of work that was done."

South Africa is a communist regime put in power by the jews to oppress Whites.

This disloyal jew, nominated by Bill Clinton, has openly admitted that she bases her decisions in the Supreme Court not on the US Constitution and not in the best interests of the American People, but rather on what she believes is good for the jews. Abigail Pogrebin wrote, quoting Ginsburg,

So I ask the obvious question, "Does being Jewish affect the way you approach cases on the Court?"—expecting her to wave it off with some boilerplate version of Justices can't let personal experience color their judgment. Instead, her answer is more nuanced. "I don't think that I approach cases in a particular way because I am Jewish any more than I do because I'm a woman. I have certain sensitivities for both. You know the old expression, 'Is it good for the Jews?' For example, a lot of people want to have crosses in front of their town hall or whatever. They say, 'It doesn't hurt anybody.' We had one case where I was in dissent—it was about a cross in front of the Statehouse in Ohio. And to me, the photograph of that statehouse told the whole story of the case: Here is the Capitol in Columbus, and here is this giant cross. And what is the perception of a Jewish child who is passing by the Capitol? It's certainly that this is a Christian country. A person's reaction could be: 'There's something wrong with me.' It's not a symbol that includes you. [colored emphasis added]"

Now, jew Ginsburg is violating the constitutional separation of powers and is attacking Donald Trump in an attempt to sway the election, the nominating process for justices, and to divert attention from the scandal surrounding Hillary Clinton, Comey, Lynch and the general corruption of the Obama administration. Recall that it was Hillary's husband, Bill Clinton, who put the corrupt and disloyal jew Ginsburg on the Supreme Court.

Ginsburg is disgusting, inside and out. She is the poster image of the jew, and why the jew must be excluded from public office.