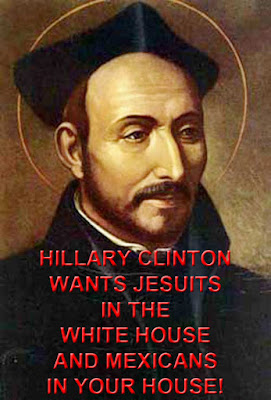 The Catholic Church, especially the Pope, having been encouraging and sponsoring an invasion of third worlders into White countries. Clinton has chosen Catholic Tim Kaine to raise Cain on the issue of immigration and draw in the hispanic vote to her ticket.

Kaine speaks Spanish and has worked with Jesuits in Latin America. He is a groomed subversive who has been corrupting the American Government for decades to change our immigration laws to favor the invasion.

Catholic subversive Kaine glorifies his Jesuit past in the following video:

Things are getting worse. Clinton would put this Jesuit tool one heart beat from the presidency. He offers her nothing other than a charge to a massive Latin American invasion.

Clinton has again chosen to put the interests of invaders over the best interests of Americans! Her relationship with Satanist jew Saul Alinsky gains clarity in view of her choice of a Jesuit tool to run with her over the cliff into the abyss of open borders. These two will bury us with Mexicans and other Latinos and fast track them into citizenship!

The Jesuits were founded by crypto-jew Ignatius Loyola. They have pushed an internationalist agenda on our children and our governments for centuries.

Posted by Christopher Jon Bjerknes at 10:52 AM