The Democrats Wrap Themselves in the Declaration of Independence and US Constitution. . . as They Recite Karl Marx's Communist Manifesto 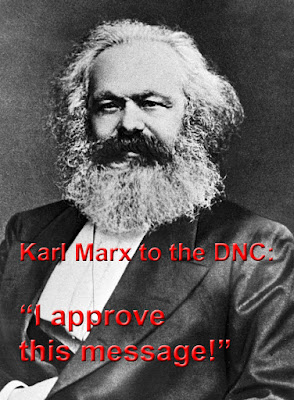 Ask yourselves if these themes from Karl Marx's Communist Manifesto sound familiar, echoed at the Democratic National Convention:

"1. Abolition of property in land and application of all rents of land to public purposes.

3. Abolition of all rights of inheritance.

4. Confiscation of the property of all emigrants and rebels.

5. Centralization of credit in the banks of the state, by means of a national bank with state capital and an exclusive monopoly.

6. Centralization of the means of communication and transport in the hands of the state.

7. Extension of factories and instruments of production owned by the state; the bringing into cultivation of waste lands, and the improvement of the soil generally in accordance with a common plan.

8. Equal obligation of all to work. Establishment of industrial armies, especially for agriculture.

9. Combination of agriculture with manufacturing industries; gradual abolition of all the distinction between town and country by a more equable distribution of the populace over the country.

10. Free education for all children in public schools. Abolition of children's factory labor in its present form. Combination of education with industrial production, etc.

The average price of wage labor is the minimum wage, i.e., that quantum of the means of subsistence which is absolutely requisite to keep the laborer in bare existence as a laborer. What, therefore, the wage laborer appropriates by means of his labor merely suffices to prolong and reproduce a bare existence. We by no means intend to abolish this personal appropriation of the products of labor, an appropriation that is made for the maintenance and reproduction of human life, and that leaves no surplus wherewith to command the labor of others. All that we want to do away with is the miserable character of this appropriation, under which the laborer lives merely to increase capital, and is allowed to live only in so far as the interest of the ruling class requires it.

Abolition of the family! Even the most radical flare up at this infamous proposal of the Communists.

On what foundation is the present family, the bourgeois family, based? On capital, on private gain. In its completely developed form, this family exists only among the bourgeoisie. But this state of things finds its complement in the practical absence of the family among proletarians, and in public prostitution.

The bourgeois family will vanish as a matter of course when its complement vanishes, and both will vanish with the vanishing of capital.

Do you charge us with wanting to stop the exploitation of children by their parents? To this crime we plead guilty.

But, you say, we destroy the most hallowed of relations, when we replace home education by social.

And your education! Is not that also social, and determined by the social conditions under which you educate, by the intervention direct or indirect, of society, by means of schools, etc.? The Communists have not intended the intervention of society in education; they do but seek to alter the character of that intervention, and to rescue education from the influence of the ruling class.

The bourgeois claptrap about the family and education, about the hallowed correlation of parents and child, becomes all the more disgusting, the more, by the action of Modern Industry, all the family ties among the proletarians are torn asunder, and their children transformed into simple articles of commerce and instruments of labor.

But you Communists would introduce community of women, screams the bourgeoisie in chorus.

The bourgeois sees his wife a mere instrument of production. He hears that the instruments of production are to be exploited in common, and, naturally, can come to no other conclusion that the lot of being common to all will likewise fall to the women.

He has not even a suspicion that the real point aimed at is to do away with the status of women as mere instruments of production.

For the rest, nothing is more ridiculous than the virtuous indignation of our bourgeois at the community of women which, they pretend, is to be openly and officially established by the Communists. The Communists have no need to introduce free love; it has existed almost from time immemorial.

Our bourgeois, not content with having wives and daughters of their proletarians at their disposal, not to speak of common prostitutes, take the greatest pleasure in seducing each other's wives. (Ah, those were the days!)

Bourgeois marriage is, in reality, a system of wives in common and thus, at the most, what the Communists might possibly be reproached with is that they desire to introduce, in substitution for a hypocritically concealed, an openly legalized system of free love. For the rest, it is self-evident that the abolition of the present system of production must bring with it the abolition of free love springing from that system, i.e., of prostitution both public and private.

The Communists are further reproached with desiring to abolish countries and nationality.

The workers have no country. We cannot take from them what they have not got. Since the proletariat must first of all acquire political supremacy, must rise to be the leading class of the nation, must constitute itself the nation, it is, so far, itself national, though not in the bourgeois sense of the word."