The Ugly Spectacle of a Former President Posing as First Lady 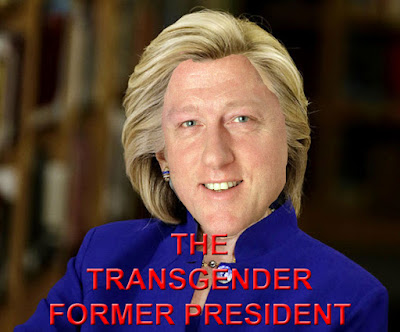 Former President Bill Clinton came out in political drag before the world and rehearsed his role as first lady in a speech to the Democratic National Convention. He strove to humanize his communist wife, to defrost the frigid witch. It was surreal.

The democratic party continued to trot out the disabled to celebrate the misfortunate, rather than make a show of American strength. In their vision, we are a crippled and dying nation.

Clinton's history of infidelity compounded the reversal of his role from national alpha male to first wife, making it an even more shocking reminder of the damage jewish cultural marxism, which finds a voice in Hillary's mouth, has wrought on America and Western Civilization. Bill did not speak much about his own politics. Hillary was more politically active as first lady, than first wife Bill.

Adding to this night of horrors was the continuation of Jewfest 2016, where the 2 percenters, the jews, take all, with speakers Barbara Boxer and the genocidal crypto-jew Madelaine Albright, who once publicly tried to justify the murder of hundreds of thousands of Iraqi children. Albright, of all people, openly discussed Trump's disloyalty and the danger he posed to the free world. Albright revealed that Trump is Putin's puppet, and the press has been silent on this massive story of tremendous importance to the American People!

What next? It worries me to wonder.

Posted by Christopher Jon Bjerknes at 8:35 AM