Marco Rubio and the Republican Bosses, If You Can't Beat Him, Cheat Him? 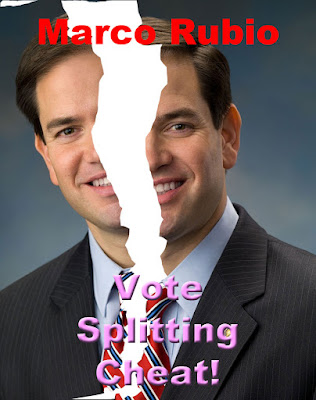 The Trotskyite Republican Party has sunken to new lows to disenfranchise voters. Marco Rubio has gone beyond the dirty trick of vote splitting with his own campaign in hopes of a brokered convention, to openly calling on voters in Ohio to vote for his opponent John Kasich, so that Kasich has better odds of winning Ohio and thereby reducing Trump's chances of scoring enough delegates to win the nomination contest despite leading the race. Rubio is in the race, not to win, but rather to defeat the Republican front runner Donald Trump, even if takes forking over his votes to Kasich, and Rubio has no shame in openly saying so. Rubio is like the scumbag in a basketball game who deliberately fouls out by trying to severely injure the other team's best player and take him out of the game, because he cannot beat them fairly.

The Republican Party coerced Trump into agreeing to a loyalty pledge, but does nothing to censure Rubio for his anti-American campaign to split the vote and spoil the campaign of the Party's leading candidate. Rubio is a creepy thief who wants to steal what he cannot fairly win, robbing not even to keep for himself, but rather to ingratiate himself to his bosses by disenfranchising the voter. He is a diseased lap dog trying to fetch away another's medal for his master.

Whatever happened to letting the voters decide an election, to letting them choose who best represents them? What is this tag team politics of loser takes all by dragging the process down into the mud where the bottom feeders lie? Why is the Republican Party championing losers rather than its own winner?

Let us hope that Rubio's slimy attempts to gang rape the leader fail. Rabid little Marco really is a dirty scurrying rat, wet with the foam of his own drool.

Kyle Hunt of Renegade Broadcasting conducted a superb interview with me last night. It is available on YouTube:

The Renegade Broadcasting webpage for the interview appears here:

Posted by Christopher Jon Bjerknes at 10:36 AM