John Kasich Is an Anti-White Propagandist for the Jews 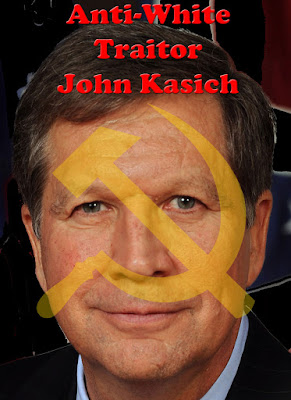 Republican Party presidential candidate John Kasich is an anti-White propagandist, who masks his hatred of the White Race behind a shroud of Christian Zionism. Like Mike Huckabee, Kasich has shamelessly participated in Fox News' incestuous relationship between mass media and politics, a stark conflict of interests once strongly condemned in Western Civilization. This consolidation of church, State and mass media behind the jewish agenda has done tremendous harm to America and the World. The same centralization of power serving jewish interests over that of the majority population occurred in the Soviet Union and continues in Russia under Vladimir Putin.

Brazen hypocrite Kasich mistreated his guest Matt Hale in the following interview which aired on Fox News many years ago. Hale has since been denied his Constitutional rights to practice law and is currently imprisoned in the jewish gulag.

America was founded as a sanctuary for the White Race. Our founding fathers recognized our fundamental rights to legal counsel of our choosing, not that of a jewish master, our right to freedom of and freedom from religion, and our rights of freedom of speech, association and assembly. Kasich stands opposed to our freedoms and calls for the banishment of American patriots. He is a communist propagandist who wants the White Race dissolved out of existence.

The false notion that America is a "melting pot" came from Rothschild agent and British zionist jew Israel Zangwill. The founders declared that America is a White nation in the United States Congress, "An act to establish an uniform Rule of Naturalization" (March 26, 1790):

In stark contrast to the intent of the founding fathers, zionist jew and Rothschild agent Israel Zangwill fabricated the myth of an American "melting pot" in his play The Melting Pot: Drama in Four Acts, Macmillan, New York, (1909/1917). Zangwill had a diametrically opposed view of the jewish nation and its quest for racial purity. Zangwill stated in his book The Problem of the Jewish Race, Judaen Publishing Company, New York, (1914), pp. 20-21:

"Moreover,while as already pointed out the Jewish upper classes are, if anything, inferior to the classes into which they are absorbed, the marked superiority of the Jewish masses to their environment, especially in Russia, would render their absorption a tragic degeneration. But if dissolution would bring degeneracy and emancipation dissolution, the only issue from this dilemma is the creation of a Jewish State or at lease a Jewish land of refuge upon a basis of local autonomy to which in the course of the centuries all that was truly Jewish would drift."

We catch Zangwill's and the jews' drift. They would drive us into extinction while preserving themselves at our expense. The jews would refine their own as silver and gold are tried to bring out the best (Zechariah 13:9), while insisting that Whites alloy themselves with what Zangwill considers slag and sludge, so as to completely disappear.

John Kasich is a racist zionist hypocrite, who, like Zangwill, wants the jews to have a segregated nation so as to preserve their race, while breeding out Whites in White nations. John Kasich wants to exterminate us in the US as he uses us as slaves and soldiers to serve jewish segregation in Israel.

Posted by Christopher Jon Bjerknes at 6:32 AM