Minor Sanctions Are Not Enough to Stop Putin 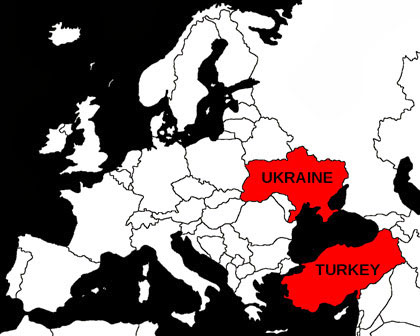 Our European allies find themselves in a bad situation. Some have foolishly made themselves dependent on Russian energy allowing the Russians to bride and otherwise control their leadership. Some nations are trapped in the old Soviet system. Russia and Israel are destabilizing Turkey and Ukraine and creating a massive Shia-Sunni conflict that threatens to cut Europe off Middle Eastern energy supplies.

Unilateral sanctions must be far more severe in order to really stop Putin, rather than merely hurt his pocketbook. The banking system needs to shut him down. NATO needs to block Russia in Turkey. Ukraine needs serious support. The press needs to expose Putin and the Soviet Union as murderous bolsheviks.

But we also need to support our European allies against the ever expanding Soviet Union by sponsoring new supplies of energy which circumvent Russia and Israel's attempt to monopolize the European energy market. The US Government should work together with Europe, and Europe should work together with the US to create new sources of supply and develop the infrastructure to deliver it to Europe. If the jews and communists seek to sabotage these efforts, we should respond in unkind.

There are opportunities to supply Europe with alternative sources of energy that our enemies are exploiting, but which we ignore, because Trump and Merkel are Putin's puppets. We should also NOT increase our reliance on fossil fuels at a time when renewables offer a better alternative.

Israel and Russia are our arch enemies and they are plotting together to seal Europe off from energy, and monopolize the international energy markets. We can stop them, but we first need to try.

I wrote this blog article The Ukraine and Turkey: The Maxilla and Mandible Biting at the Black Sea Rope in the Tug of War Between Europe and Asia more than three years ago and my predictions have since come true:

It is no coincidence that Greece, the Ukraine and Turkey are being thrown into political turmoil at the very same moment. Russia, which has always thought of itself as White European as opposed to mongoloid Asian, is being redirected under bolshevik traitor Vladimir Putin to become aligned with Red China against White Europe. Rather than remapping Europe to include all of Russia as he should, jew puppet Putin seeks to cut into Western Europe and convert it to Asia, as in Chinese.

To assist in this pernicious process, the jews have sent Greece, the Ukraine and Turkey into turmoil. Should Turkey and the Ukraine surrender their sovereignty to the European Union Empire, the jews will use them as gateways into Europe for Africans and Asians. Should the Ukraine and Turkey surrender their sovereignty to Putin and Red China, the jews will flood them with Chinese and cut off Western Europe from energy supplies, while concurrently subverting the USA leaving the Western Europeans in isolation as the jews flood Western Europe with Africans and Asians. Either way, the jewish controlled empires, be it writ EU or BRICS, spell disaster and genocide for the White Race and Europe.

Turkey is a multiethnic nation carved out of historically Greek and Armenian territory. It has been the source of numerous Mongol and Muslim invasions of Europe. It has been jewish controlled for many, many centuries, and remains so. The present government of Turkey has helped the jews ruin several prominent Arab nations, as I predicted they would. This also serves the jews to drive masses of Arabs into Europe, as I predicted it would. The Turkic peoples have long served as pawns for the jews to create wars with Russia and China, as well as Western European nations. The Greeks claim the west of Turkey, and the Armenians and Kurds claim the east of Turkey. The Turks pretend to themselves that they are racial Turks, but they are in fact a very mixed group of people.

The jews are creating a tug of war over the Ukraine and Turkey between Western Europe and traitorous Putin and Red China. But as is the jewish way, the results of this conflict depend solely on the desires of the jews and will largely produce that same result, the good of the jews, which ever way the line is crossed.

It all becomes clear and simple when you simply look at the map and see what is happening. We should be discouraging the growth of empires and working toward national sovereignty. When empires form, the result is miscegenation and loss of racial and national tradition. When empires clash, the result is world war. The jews play the world in this way, this cycle of empires and nationalistic struggles, like an organ grinder turns his music box, and the monkeys all dance to the tune. It is time to break free from their grasp.

Posted by Christopher Jon Bjerknes at 8:01 AM