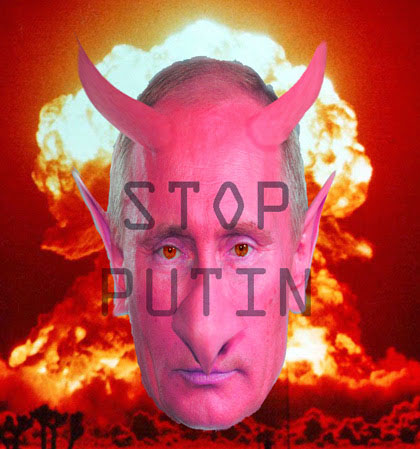 Shortly after Washington ordered Moscow to close its consulate in San Francisco and annexes in DC and NY, Kim Jong Un declared that he has hydrogen bombs and North Korea detonated a powerful nuclear device. Red Russia had threatened a mighty response. It came from Red Russia's proxy State North Korea.

Red Russia has been flying nuclear bombers around the Korean Peninsula to threaten America and our allies with a nuclear attack. Red Russia has supplied North Korea with ICBM missile technology and fuel. Red Russia has now given North Korea hydrogen bombs, and what has Donald Trump said or done about it? Nothing.

North Koreans are fond of tunnels. They have built several leading into South Korea. It is almost certain that they have built many more from North Korea to Red China and Red Russia. Putin is amassing Red Russian troops on the North Korean border. Red China is amassing troops on the North Korean border. If those tunnels exist, they may be filled with weapons stockpiles, armored vehicles and mobile nuclear missile launchers. They might also serve as fallout shelters for North Koreans, Red Russians and Red Chinese. While the communists are preparing for war, America and our allies, led by the communist press which subverts us, is seeking new methods of appeasement.

This will inevitably lead to a preemptive nuclear strike on North Korea. But the Red Russians have now supplied North Korea with hydrogen bombs and ICBMs. The Red Chinese and Red Russians can now launch hydrogen bombs on South Korea, Japan and the United States and scapegoat North Korea for the attack. Given Trumps reticence on Russia he himself may cast doubts on our military's reports as to the source of the attack and call it "fake news" that Red China and/or Red Russia has fired off a nuclear strike on South Korea, Japan and the United States.

It is not going to be pretty, but the United States of America has to act immediately, or face a rapidly deteriorating situation inevitably leading to a global nuclear war. The sooner America attacks, the more difficult it will be for Red China and Red Russia to launch false flag attacks the US and our allies under the pretense that these are North Korean attacks. If we do not immediately begin to treat Red China and Red Russia as the existential threat and bolshevik regimes that they are, we will not survive.

Posted by Christopher Jon Bjerknes at 11:13 AM