On South Africa, the Undeclared Communist Country, and George Galloway's Naked Hypocrisy Exposed in His Own Words 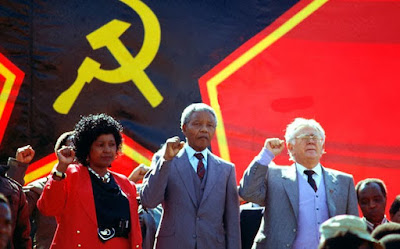 South Africa is today a communist country that was founded by communists. In order to glorify himself in his own eyes, George Galloway makes much of the support he received from Jews in South Africa, Jews who led the Marxist revolution which displaced South Africa's White leadership:

Like all Jewish led communist nations, South Africa seeks to genocide the best among its non-Jews, those Whites who had made of it a successful modern nation. Killing off the best Gentiles is an ancient Jewish tradition. Soferim, Chapter 15, Rule 10, states, quoting the much celebrated genocidal racist Jew Simon ben Yohai:

The Old Testament book of Obadiah verse 8 teaches the Jews to destroy the intellectual class of non-Jews and deprive the Gentiles of knowledge,

"Shall I not in that day, saith the LORD, even destroy the wise men out of Edom, and understanding out of the mount of Esau?"

Galloway ignored the facts of Jewish involvement in politics in South Africa, facts which were known to him from personal experience, to instead launch a fanatical tirade against a White man speaking the truth, during which self righteous rant Galloway refused to allow an uninterrupted response to his own questions in a prolonged, childish, irrational and uncivilized fit of staged fury:

Galloway shamelessly and expressly praised Karl Marx specifically as a Jew, one of those Jews who according to Galloway was among the exclusively Jewish club of, "the greatest people on the earth." Reminds one of the Jews' self declared status as the chosen people of their genocidal god.

Karl Marx, whom Galloway praises as if a Jew who never would have supported genocidal policies, was in fact was a genocidal maniac. Marx and Engels advocated the genocide of peoples which would not abide communism. One of the more recent and well-known pleas to genocide Whites came in Karl Marx's organ Neue Rheinische Zeitung and was issued by his cohort in genocidal crime Friedrich Engels:

"These remnants of a nation mercilessly crushed in the course of history, as Hegel says, this national garbage will always be, and will remain until their complete extirpation or denationalization, the fanatical bearers of the counter-revolution, just as their whole existence in general is a protest against a great historical revolution. [***] The general war which will then break out will shatter these Slavic special federations and exterminate all these little bull-headed nations right down to their names. The next world war will not only eliminate reactionary classes and dynasties, it will also erase entire reactionary peoples from the face of the earth. And that constitutes an improvement."

Marxists in the Soviet Union displaced untold millions to ruin their ethnic homogeneity, and slaughtered tens of millions of the best Eastern European Christians. Has Galloway no shame in praising Marx? Marxists have deliberately caused the deaths of more than 100 million people. So who are the murderers, George, if not the Marxists? Have you nothing to say about that?

Galloway irrationally shouts down and censors what he cannot refute with facts and reason. His primitive responses remind one of the uncivilized behavior of many genocidal South African blacks towards South African Whites.

What of the people's right to know, George? What of the right of human beings to speak out against their own genocide? Will you have none of it? Lock 'em all up, is that your response to those who speak the truths and opinions you wish to suppress? That is a typical Marxist response to free speech and the public's right to know and it is primitive, uncivilized, brutal and opposed to the finest traditions of Great Britain and Western Civilization.

Galloway, who lamented the imprisonment of the communist Nelson Mandele and his Jewish comrades and handlers, called for the imprisonment of a White South African of German descent for expressing opinions and facts known to Galloway. Galloway was merely toeing the tyrannical Jewish line, stated by the Jewish tyrant Ludwig Boerne almost two centuries ago. Ludolf Holst published Das Judentum in allen dessen Teilen. Aus einem staatswissenschaftlichen Standpunkt betrachtet, Mainz, (1821), which offended Ludwig Boerne. Boerne responded with a negative review of Holst's book and famously stated that he eagerly awaited the day when any statement which offended Jews would bring its author into prison, or the insane asylum.

Galloway's greatest people on the earth are tyrannical and genocidal fanatics. They oppose civil debate and will have none of it. It exposes their agendas and offers a reasoned defense against their attacks. The Jewish Old Testament calls for the enslavement of all non-Jews and advocates for the brothers' wars the communists deliberately cause. Have we no right to defend ourselves with our speech against these genocidal attacks which originate in Jewry? Here is the communist creed of the Jews expressed in their Old Testament:

"And the three hundred blew the trumpets, and the Lord set every man's sword against his fellow, even throughout all the host: and the host fled to Bethshittah in Zererath, and to the border of Abelmeholah, unto Tabbath."--Judges 7:22

Your Jewish agenda is crystal clear, George. You need not make such a show of bowing down to the Jews. We all recognize your servitude to their cause.