What Is to be Done About the Un-American Social Media Oligarchs?

Facebook has just banished Louis Farrakhan, Paul Nehlen, Alex Jones, Milo Yiannopoulos and Laura Loomer. Turn about is fair play. Facebook is owned by the Billionaire Social Media Oligarch Mark Zuckerberg. He loves to talk! More than that, he loves to heard! But he hates my American values which honor free speech for all. So by his own standards, he should be banished and muzzled, but how? How do you compete with billionaires who hold all the advantages and impose their own unfair rules against them?

Their power is now both clerical and profane. They have become the Church and the State. These Billionaire Social Media Oligarchs are assuming all the rights and privileges of the Monarchs of old, and of the Church. They are imposing punishments, engaging in banishment and setting an arbitrary standard of morality and behavior, any breach of which results in censorship and exile. Tyranny by State, Church or Billionaire Social Media Oligarch is still tyranny.

Is Zuckerberg free to be a dictatorial tyrant and inhibit my ability to engage in the political process in the same fashion as any other human being? Does he have the fundamental human right to corrupt our political process to favor his personal agenda and that of his tribe? I say that he does not.

His freedom ends where it conflicts with my rights to freedom of speech, assembly and my rights to engage in a political process which affords me the same rights and opportunities as every other citizen on a level and fair playing field. Zuckerberg seeks to make it impossible for anyone he would silence to use the political process in an equitable way to reinstate the system of government and the social contract established by the Founding Fathers. Zuckerberg has labeled the beliefs of the Founding Fathers "dangerous" and banned them from his services. He has contradicted their beliefs in the absolute right to free speech.

Only I have the right to determine my morality. Only I have the right to determine what I think, believe and say. If I decide to think and say something which Zuckerberg deems "hateful" then too bad for him. He has no right to impose his will on me, or my thoughts and expressions. He is not my King, nor is he my church father. He cannot tell me what to think, believe or say. Does he grant me the same authority to silence and banish him for hating the beliefs of our Founding Fathers, as he exercises to keep me from expressing those same beliefs? What gives him greater political rights than me? Does he fancy himself the new Torquemada as he engages with the Facebook secret police to search out every blasphemous statement I may make of which he disapproves, so that he may publicly humiliate, banish and silence me?

This is identical to the tyranny of Nazi Germany and Bolshevik Russia. Why did we oppose those tyrannical regimes? Was it to let Billionaire Social Media Oligarchs create secret police and artificial intelligence programs to engage in surveillance over us so that we learn to watch our step and obey, or be punished and censored? Did our forefathers fight and die to give us freedom only to have a handful of billionaires take it away and publicly shame us for not obeying their religious codes? They even have the public pillory of putting accounts in limbo for periods of punishment under threat of deleting them for disobedience. They are treating us like animals and robbing us of our human dignity.

We should enact laws against this oppression, so that the State can regain its authority to secure our liberty. We should utilize the powers of the State to restrain these tyrants from unfairly imposing their will on American citizens.

Lord Acton wrote in his correspondence the famous lines,

"But if we might discuss this point until we found that we nearly agreed, and if we do agree thoroughly about the impropriety of Carlylese denunciations and Pharisaism in history, I cannot accept your canon that we are to judge Pope and King unlike other men, with a favourable presumption that they did no wrong. If there is any presumption it is the other way, against the holders of power, increasing as the power increases. Historic responsibility has to make up for the want of legal responsibility. Power tends to corrupt, and absolute power corrupts absolutely. Great men are almost always bad men, even when they exercise influence and not authority, still more when you superadd the tendency or the certainty of corruption by authority. There is no worse heresy than that the office sanctifies the holder of it. That is the point at which the negation of Catholicism and the negation of Liberalism meet and keep high festival, and the end learns to justify the means.--Letter from Lord Acton to Mandell Creighton (5 April 1887), published in Historical Essays and Studies,Mamillan and Co., London, (1907), p. 504.

These Billionaire Social Media Oligarchs have far too much power over us. We have to take it away from them through the power of the State and our laws. They are pretending that if they silence everyone who they want to quiet, then the world will be a safe place for all. The fact is that their power to oppress us is the greatest danger we face. Benjamin Franklin said, "Those who would give up essential Liberty, to purchase a little temporary Safety, deserve neither Liberty nor Safety." The Social Media Oligarchs claim that the means of banishment and forced silence are justified by the end of public safety, but who is safe from them, when anyone who speaks out against their oppression disappears from the public arena they control? How can we have free and fair elections when the public forums for political discussion are controlled by the enemies of freedom, and make no mistake about it, those who banish and silence the political views of men and women who speak the same words as the Founding Fathers of America are the enemies of our freedom. 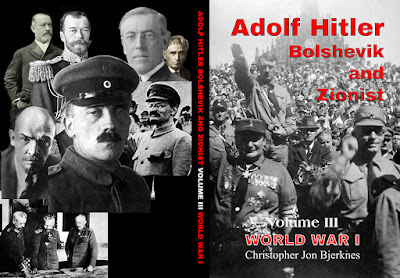 My new book Adolf Hitler: Bolshevik and Zionist, Volume III, World War I is now available in paperback and as an Ebook. The description reads as follows:

Volume III of ADOLF HITLER: BOLSHEVIK AND ZIONIST is a thorough analysis of the causes, consequences and aims of the First World War. Walther Rathenau described the First World War as a "World Revolution". Jacob Henry Schiff accomplished what Hitler and Napoleon could not. Schiff defeated Russia through revolution and installed his own government to rule the nation. During the war, General Erich Ludendorff promoted the Communist cause around the globe. Ludendorff helped to put both Lenin and Hitler in power. Of the three cousins who instigated the war, Tsar Nicholas II, Kaiser Wilhelm II and King George V, two lost their thrones. The war was a Socialist Revolution that unseated the Monarchies of Continental Europe and enthroned Socialist dictatorships. The war also produced the Balfour Declaration and enabled the British to take Palestine from the Ottoman Empire. Communists and Zionists predicted the world war in the 1800's and welcomed the opportunities it would bring them, which they accurately forecast.

Interesting Article in "Welt" on Adolf Hitler, the Extreme Leftist in the Soldiers' Councils of the Bavarian Soviet Republic

A few weeks after I published my book Adolf Hitler: Bolshevik and Zionist and this video:

Maybe I opened up the conversation.

Posted by Christopher Jon Bjerknes at 10:10 AM